A couple of weeks ago I presented

by David Raposo, Matthew Kaufman and Anne Churchland.  By “categories” they are referring to some population of cells whose responses during an experiment seem to be dominated by one or two of the experimental variables. The authors refer to these types of categories as functional categories.

The data come from experiments in which rats were trained to discriminate between high and low rate pulses of both visual and auditory stimuli (see the figure below).  In some trials the rats were presented with only visual stimuli, some only auditory, and some both.  The rats were presented a stimulus and then had to make a choice to make a nose poke to either the left or the right to indicate whether they thought the stimulus was high-rate or low-rate (with “high” and “low” determined by a threshold set by the experimenter during training).

The paper can be fairly clearly delineated into two parts. In part I, the authors use pharmacological techniques to demonstrate a causal role of posterior parietal cortex (PPC) in the task. The experiments can be summed up by this Figure: 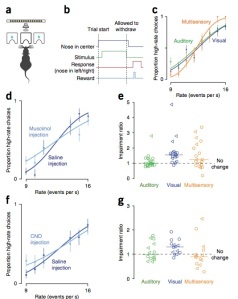 The rats, predictably, were able to do a better job of discriminating high-rate from low-rate pulses when both sensory modalities were present. Furthermore, they showed rather convincingly that PPC was involved almost exclusively in the processing of the visual stimulus.

The second part of the paper, in my view, is the real meat of the paper. This part is comprised of a suite of statistical analyses that pick apart the population data to find evidence for functional catagories.

The authors did a great job illustrating this part of the paper with figures.  For example, here is a figure of PSTH’s that points out the way that many people still think about neurons involved in this kind of task:

Solid lines are PSTHs for trials where the stimulus rate was high, dashed lines were for low-rate trials.  Blue are PSTHs for visual-only trials, green are for auditory-only trials. The neurons here demonstrate selectivity for a) choice, b) modality, c) mixtures, d) something dynamic. In the past, the way that one might study these cells is to identify those cells in a) and b), using some selectivity metric, and then declare them a special class of cells that are selective for the choice of the animal and the stimulus, respectively.

However, check out the other half of the same figure:

In (f-h) the authors are showing us histograms of their measure of choice preference (f,g) or modality preference (h) over all cells.  The shaded regions are histograms of the cells for which this metric is significantly > 0. We can easily see from this figure that these “selective” cells (in the shaded regions) do not belong to special populations, but are simply in the tails of some distribution that is centered on 0. Their identity as “selective” is no more than an artifact of our classifying them based on a p-value.  Thus, most cells are more like the cells in panels c) and d) above, displaying some mixture of selectivity, or even some dynamic behavior which is perhaps not well summarized by the PSTH. 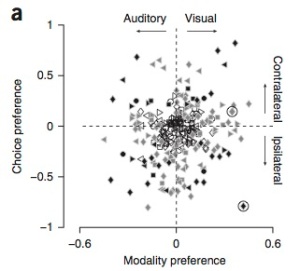 Panel a) shows a plot of the choice and modality preference metric for each cell.  It is easy to see that there are no clusters.  Of course, the authors go much further in their analysis of clustering, using the top 8 singular vectors of the population PSTHs, and examining distributions of nearest-neighbor angles, and found no evidence of clustering, but I won’t get into that here.

They found that the movement space and the decision space were poorly aligned (see figure below). This observation is similar in spirit to an interesting paper (also by Matt Kauffman), describing why it may be useful for population trajectories to explore mis-aligned vector spaces while performing different functions.

Together these findings reject the notion that each neuron in PPC is encoding something specific about the experiment, and that this mixed selectivity is a feature of the network.  The authors provide a well-articulated normative explanation for mixed selectivity:

Theoretical work suggests a major advantage for category-free populations: when parameters are distributed randomly across neurons, an arbitrary group of them can be linearly combined to estimate the parameter needed at a given moment[12–14]. This obviates the need for precisely prepatterned connections between neurons and their downstream targets and also means that all information is transmitted. This latter property could allow the same network to participate in multiple behaviors simply by using different readouts of the neurons.

which seems to be the situation born out by their data.

My only complaint about this paper is that, although I am totally on-board with this hypothesis, it seems to me that in some sense this paper is trying to prove a negative. The fact that they found no evidence for categories is not evidence for absence of categories. To be fair, they allude to other types of categories (cell type, connectivity) in the discussion. Here they are specifically referring to functional categories, which are defined a priori by the experimenter, which is the problem with functional categories to begin with.